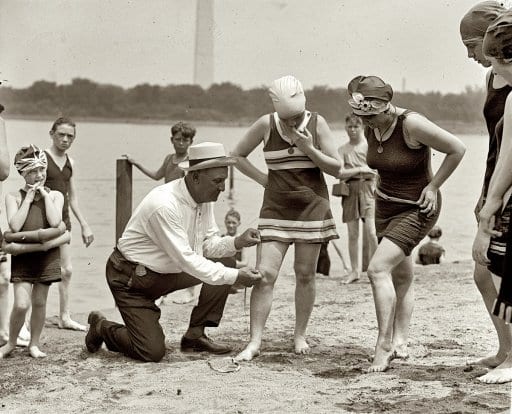 This month’s post follows suit from last month’s The Hat-Pin: Fashionably Dangerous. Below are laws and arrests as related to the hat-pin and other fashion items considered morally corrupt, impeding, or dangerous to society….

1 Shorten and Cap those Hat-Pins

As the hat-pin became a formidable preventionary tactic from lecherous men, some long hat-pins became worrisome to the public for the potential damage they could inflict. Cities began enacting laws that would regulate the size of the hat-pins to prevent more serious damage. Check out some of the laws that were passed, most of which are noted in the book, The Hatpin Menace[1]:

Can you imagine watching a show from behind these hats? In the 1890s, ladies’ hats had reached enormous proportions. For those attending the theater to watch a performance, this could be a problem if their view was blocked. In fact, this became such an issue that many cities began passing laws that prevented women from wearing large hats to the theater! Here are some of many examples, again as found in the book, The Hatpin Menace[3]:

For women who wanted to wear pants in this period, it was a serious matter. The biking craze of the 1890s presented a legitimate need for bifurcated apparel, and helped spur the use of pants by women, but they needed to tread cautiously. Many laws prohibited cross-dressing and this issue tiptoed up to the legal line.

4. Beware of a Bathing Suit Scandal

Recreational bathing was a newer pastime in 1880, especially for women, and bathing costumes largely resembled women’s daywear. This was cumbersome for the water, and as the years progressed, women’s bathing suits began to resemble the more linear, less-layered men’s bathing suits. This meant more skin might show, and some felt that this exposure was indecent.

These laws reflect a more conservative era in Western fashion history, but our perceptions of what is considered acceptable or stylish continually change. Who knows what we will look back on in 20 years and find unusual that we wear today? Hopefully nothing wound-inflicting like an extremely large hat-pin.

Thanks to the sources under References below for excellent information on fashionable laws and related arrests in history!

What Will She Do in a Skirt?

One thought on “Threatening Style: Clothing Laws and Enforcement from 1880-1930”