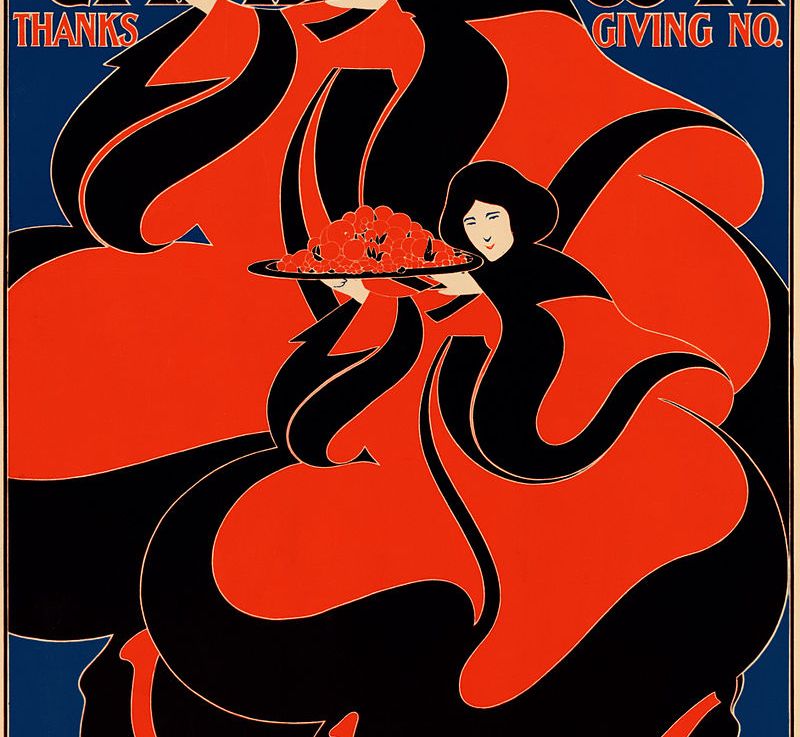 American Thanksgiving will take place this week and this month’s post will celebrate imagery associated with the holiday. As you may have read in the previous FFF post on Thanksgiving, this holiday was instituted in the United States in part thanks to Sarah Josepha Hale – an extraordinary woman of here time (another great article on Hale from Time can be read here).

This post will explore romanticized images of Thanksgiving depicting women whose images seem to come from another era. These artistic renderings meld visions of previous decades or centuries with the date in which they were published in order to create a unique form. From these images we can see how the lines of fashion can be blurred between past and present, and at the same time, may even be part of a burgeoning new style.

Is there a more appropriate place to start than The Ladies’ Home Journal?

This first image from 1892 is the cover of the Ladies’ Home Journal. The clothing this woman wears is a romanticized version of what a pilgrim woman would have worn in the 18th century, with a bodice and cape more in line with the 1890s. The late-19th century often looked to classic imagery for inspiration so this cover is certainly in keeping with the style of that time, even though this idealized woman is wearing clothing that would not have been from that period (like the pilgrim-style hat and long apron front dress).

This woman wistfully looks at the fields around her, presumably on her own farm. We can note that her ensemble reinforces the connection to the early pilgrims and farming the land while still looking very elegant (which would attract LHJ readers).

This Harper’s Bazar image from 1894 has a distinctively different style. This is by the artist Louis Rhead (read about Rhead and see more examples of his work from the SAAM here). Rhead was a prominent poster artist in the 1890s and designed covers for a number of magazines. His style relies on heavy lines and medieval-esque imagery. He was influenced by the Arts and Crafts movement, or Aesthetic movement, that was happening during this time. This style came about as a reaction to the mass production of the 19th century and celebrated folk-inspired motifs, medieval imagery, and emphasized nature, while the artist employed traditional techniques to create their work.

The woman shown on the right is dressed in a way that seems more like a costume than typically 1890s dress. Her hair worn down in an elaborate headband, V-neck dress, and patterned sleeves seem to belong to another era. Her puffed sleeve shoulders, however, do maintain a connection with the rising shoulder styles of that 1890s period in which the cover was made.

This cover from 1895 is even more stylized than the last. The artist, William Bradley, often drew Art Nouveau illustrations and was highly sought after. The oversized organic shapes of the dresses here are made in the Art Nouveau style that began around this period. Interestingly too, the middle hair part with low rounded style, sloping shoulders, and rounded skirt seem more like the fashion of 1865, like the photograph below …..

…..than like the illustration below from 1895 in which the cover was produced: The voluminous skirts on The Chap Book‘s cover are similar to the bell shape created by the crinolines worn underneath the skirts in the 1860s. The wide sleeve opening of the red and black drawing also seem akin to the wide pagoda sleeves of the Civil War era, like the woman in the photograph.

However, as mentioned with the curvelinear shape of The Chap Book cover’s forms, it seems like a foreshadowing of the Art Nouveau style that would soon dominate artistic circles. The image below is an example of classic Art Nouveau work, and was made a few years later in 1898.

Not every image associated with Thanksgiving was also reminiscent of another era, but I found it interesting that so many of them are. It makes sense that artists might incorporate nostalgic imagery for holiday drawings, or that the magazines might select an artist that typically has that quality in their work. These images of women were not propelling females forward in terms of clothing design but I think do speak to the advancements for artists in terms of the greater liberties they might use in their works- something that would greatly increase as the 20th century progressed. It also provides good examples of the way fashion and magazine illustrations might vacillate between past, present, and future. This can give us insight today on the artistic movement or influences that were occurring during that period and makes us think about the purpose of bringing historical or classical influence into a modern drawing.

If you enjoyed this post, you may also like 7 Things You Didn’t Know about Sarah Josepha Hale and Vogue and Harper’s Baza(a)r December Holiday Covers.

Follow me for updates on new blog posts and additional social media posts: