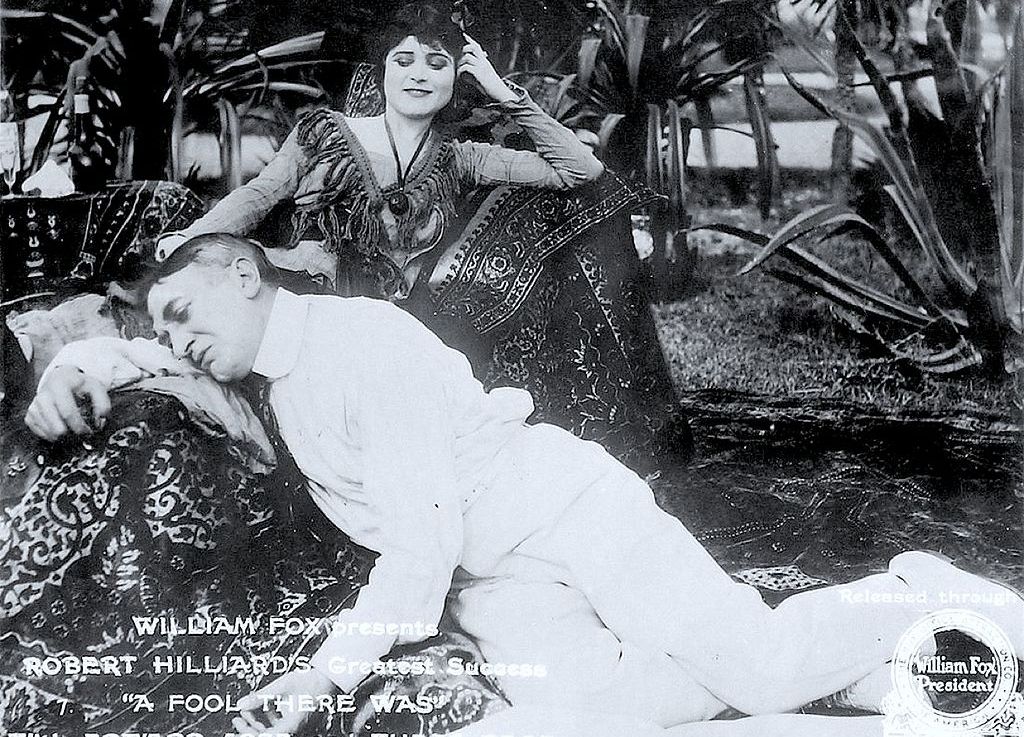 One of the earliest queens of the silent screen, Theda Bara dominated the moving pictures through the mid and late 19-teens. The turning point for Bara, James Card, film historian, believed was her portrayal of a vampire seductress in A Fool There Was in 1915. This was Bara’s second film (in her first, The Stain, she played a bit part) and would begin a torrent of similar roles. This is also luckily one of her few surviving films, as most were destroyed during a Fox film vault explosion in 1937. In Card’s book, Seductive Cinema: The Art of Silent Film, he noted Bara was not the first to introduce female vampires to the silver screen, but she is probably the actress best remembered for this. The Vampire (1910), among a few other films, showcased a female vampire in various forms but Bara made such an impression that many often confuse her as the first. Bara’s name has now become synonymous with the term vamp.

“Vamp” was developed early on in film making and plays on the origins of the word vampire, a blood-sucking corpse from European folklore. The word vamp or the meaning of a female vampire came to define a woman who uses her charms to seduce and take advantage of men, rather than literally sinking her teeth into their necks.  Eve Golden, a biographer of Theda Bara’s, gives background information on the term:

“Until 1915, a ‘vamp’ was either a piece of stage business or music done over and over between acts […], or the upper part of a shoe. But by the end of 1915 the word had entered the American vocabulary as ‘a woman who uses her charms and wiles to seduce and exploit men.’”[1]

Even though Bara’s second film, A Fool There Was, rocketed her to fame and would begin her role as the vamp, she was still called a “vampire” at this time. Vamp was later used as a playful nickname for her while filming The Devil’s Daughter, in a similar role that same year in 1915, and seemed to stick after this point.

Unfortunately, so many details about Bara’s life are difficult to pin down. Golden cautioned modern historians to bear in mind that Bara was a star at a time when it was common to merge fact and fiction to create backstories for actors, and by the time historians and biographers investigated her life, there was relatively little to go on. Theda was born Theodosia Goodman to Swiss and Polish immigrants in Cincinnati, Ohio, most likely in 1885, though the studio tried to portray her as part French, Italian, and Arabian at various times.[4] They were a relatively well-to-do Jewish family. She showed a penchant for the dramatic arts at an early age and eventually moved to New York to pursue a stage career in 1905.[5]

Prior to Bara’s 1915 vampire film, a couple of key events had taken place that would change the industry and set the stage for lasting stars. In 1910, Florence Lawrence, one of film’s first starlets, was the subject of a false death which was used as a publicity stunt for her newest film. This caused so much intrigue when fans discovered she wasn’t dead that she was “mobbed” at her next appearance.[6] Thus began hoards of fans that would await stars off-screen. Another important factor was the invention was the first fan magazine for film, Motion Picture Story, in 1911, which would cultivate the powerful following (though still nothing like today) and allure that surrounded film stars even outside of the screen. The studio used this to their advantage in order to generate interest surrounding the unknown Bara while they were filming, and then maintained a forced, otherworldly allure for the press. The studio planted a fake story about Bara’s Arabian background to cause a scandal, and would later stage hotel rooms with crystal balls and mysterious objects, given that her actual apartment and background were seen by the studio as too common and relatable.[7] Ironically, Bara is one of the few stars with a scandal-free, conservative personal life (as far as research has shown).

Evolution of the Female Vampire to Film

Although a vamp on screen today may seem like an overly familiar trope, at the time, in the early 19-teens, this was seen as a character anomaly. Inspired by Sir Philip Burne-Jones, who painted The Vampire in 1897 (left photo below), Rudyard Kipling would write a poem encompassing what it meant to be a powerful, dangerous, female vampire that same year.[2] This poem was called, A Fool There Was, of course, would ultimate result in the cinematic version starring Theda Bara (right photo below). 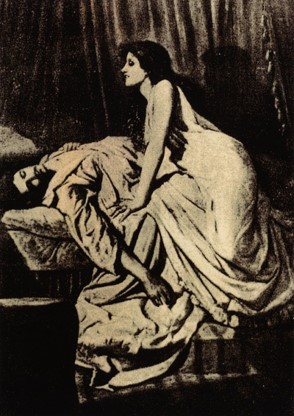 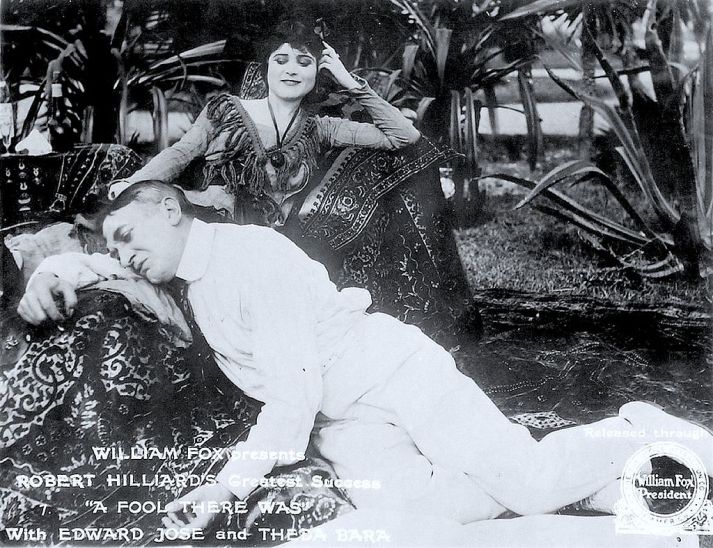 The poem is actually used in the opening sequence and throughout the film. You can read the poem and watch the film by clicking here!

As Theda Bara’s films were all silent, great importance was placed on her appearance and visual charisma. In the early 19-teens, actresses were expected to supply the majority of their own wardrobes. Most of Bara’s clothes had unfortunately been destroyed in a fire just before her first film, and so she successfully negotiated her contract with William Fox (much later to become 20th Century Fox) to $150 per week instead of $100 in order to fill out her wardrobe.[8] This would help her costume selection by the time she made her second film, A Fool There Was. At this point in her career, Bara had still not been able to achieve fame on the stage and was about 30 years old.

Her costumes in the film A Fool There Was certainly did set her apart. Often wearing sumptuous furs, feathers, velvet, and overall appearing very fashionable, Bara looked the part of the stylish and enticing vamp. It makes sense that William Fox, under whose studio she acted, would encourage Bara to dress similarly in her private life for press photos in order to maintain an image of aspirational exoticism and luxury.

Equally significant in creating her look was Bara’s makeup. It’s important to keep in mind that in the 19-teens, makeup was still largely viewed with disdain, and was not worn by respectable society. In contrast to this, makeup for filming was particularly heavy so that skin tones and facial features would appear closer to their natural color through the film’s grey-scale. Bara reported that she felt so uncomfortable with her first scene when she had to wear makeup in public. Golden wrote that “neither white nor red showed up well on film, so Theda had to appear on that public street with a yellowish face, blackened eyes and brown lips.”[9] In contrast to the other actors and actresses, not only was her face made up, which would have been unusual for the average woman, but her makeup was much heavier and darker than the others in order to portray a more exotic and sensual image.

It appeared off-color in order to better register on the screen as white skin with darkened features and red lips. Her thickly rimmed eyes and dark lips played into her Arabian (and sometimes Egyptian) publicity myths and further sensualized her features. Kate, played by Mabel Frenyear, in contrast to Bara appeared not to be made up at all or very little. This accentuated the narrative of her innocence and provided an obvious foil to Bara.

This further served to showcase Bara as a unique specimen. The clothes worn by Frenyear in contrast to Bara also seemed much more dated and matronly, with high narrow collars and dainty lace trim. Even compared to the other party girls in the film, Bara’s emphasized makeup and more stylish ensembles set her apart.

Following A Fool There Was, Bara quickly gained notoriety for her enchanting portrayal of a vicious seductress, and she immediately began making more vampire films that year. Something that almost all of her biographers make mention of is her ability to enact on screen what is difficult to discern through photos. If you get a chance to watch the film I think you’ll see what I mean. Her movements translated well to film, which was difficult for most of the period’s actors and actresses who were typically trained in over-exaggeration for the stage. Her gestures offered a dark playfulness that exuded much more sensuality and seemed more fluid than her photos of the time.

Though box office successes, some cities wanted to make cuts to her vampire films because of their perceived immorality. In defense of her screen persona, Bara expressed to the ministers of her hometown in 1916 in Motion Picture Story, “‘I am saving hundreds of girls from social degradation and wrong-doing. I believe I am showing time and again the unhappiness—the misery which falls to the lot of men transgressors, and the contempt and hatred which such people inspire in good society and among the well-behaved people of the world.’”[3] This was in defense of her film, The Serpent, by which time she had starred in many vampire roles. This may not have been just for publicity’s sake, as Bara was fairly conservative in her personal life, and not at all the vamp she was made out to be.

A Fool There Was virtually launched Bara to stardom in a way that had not been achieved so instantaneously by a screen actress before. The popular success of AFTW quickly led to subsequent versions of vampire roles, and soon Bara was making a film every six weeks, ultimately about 40 over the course of her career.[10] Studios churned out films in those early years like we wouldn’t believe today, and it’s easy to see how an actor or actress could quickly tire of typecast roles or how the public might lose interest in a star that over-saturated theaters. I think this played a role in the brevity of Bara’s career, which lasted about 6 years. Golden writes that AFTW had to be shot so quickly that there was no time for rehearsals and directions would be given to Bara on the go as they filmed.[11] In making multiple films a year, most of which typecast her as the same vamp character, it’s easy to see how Bara would have felt disenchanted with her film career after about a decade.

Post-WWI, Bara had grown weary of the endless vamp portrayals, and it is likely so too did audiences. By the 1920’s Bara’s shooting star had faded, but her image as vicious, powerful vamp has continued to leave an impression (though maybe to Bara’s chagrin). Unfortunately, many of her films have been lost, but A Fool There Was is still preserved and accessible! While the idea of a female vampire may seem tired today, I think we can appreciate the novelty of this character around the turn of the century when the power of women was limited, and also Bara’s talent as a rising film star and silver screen seductress.

For anyone interested in more of Theda Bara’s story I would highly recommend the biography by Eve Golden! As you can see, I’ve referenced this book a lot in my research.

Follow me for updates on new blog posts and additional social media posts: