Flying in the 1900s was not for the faint of heart. It was relatively so new, the Wright brothers having just sustained the first heavier-than-air aircraft in flight in 1903, and required such skill that crashes were commonplace. The cockpits were uncovered in the open air (no seatbelt) so if the plane were to flip upside-down unexpectedly, pilots could fall out. Not surprisingly, because of the risk and skill involved in piloting a plane, this was considered to be a man’s domain although there were still brave women undeterred.

Not likely to be hired as pilots, adventurous women would often initiate their own air shows and stunt flying, called “barnstorming.”[1] As you can imagine, at that time, not only did spectators want to see the death-defying stunts but also to watch them performed by a female pilot, or aviatrix was an added novelty. As the 20th century progressed, female pilots evolved from barnstorming stunts to achieving new records in flight. Throughout the Femme Fashion Forward period (up until 1930) flying was still dangerous in many regards, and it took certain amount of courage that few possessed.

These women were brave and defied the norm, but often did so with an irresistible flare. Pushing the boundaries of what women were believed capable of, and perhaps with an enviable level of confidence and bravery, it’s no wonder many others looked to them as inspiration. Here are 5 women in particular that you may not have heard of, but at that time were widely known for their skills in the air. From a fashion history perspective, I think it is important to note what these women were wearing, which was often a blend of clothing from the “male” flying domain and womenswear. 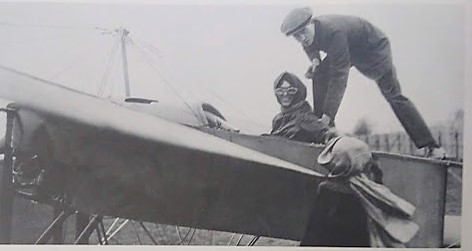 Quimby, a journalist, was the first licensed female pilot in the United States in 1910. She was also first female pilot to fly across the English Channel in 1912. [2]  The photo above shows Quimby right before this journey. She is described as wearing a bold flying suit made of purple silk on that day in April 1912. There is something undeniably stylish about her too, and it could be her confidence and daring paired with such a look. She is wearing the usual flight googles but has a feminine head scarf in contrast.

The photo below shows Quimby mounting her plane, a Moisant monoplane, in 1910. The pants she’s wearing are very loose which would have conformed to the more acceptable pants for women (although definitely not encouraged, and certainly not worn by most Western women) where the idea was for the pants to appear so voluminous they almost liked like a skirt. Do you see the seat in that plane?!

Unfortunately, Quimby died 3 months later when her plane spun out of control into Dorchester Bay, close to Boston.[3]

By Unknown photographer – Immediate image source: Episode 1819 of “The Engines of Our Ingenuity”.Original source: The American Review of Reviews, 1911; probably in an article by William Menton, entitled “The Aeroplane – A Year’s Marvelous Progress”., Public Domain, https://commons.wikimedia.org/w/index.php?curid=1699982

By The Library of Congress [Public domain], via Wikimedia Commons

Stinson began as a barnstormer and invented some of her own stunts. In 1912, she became the 4th licensed female pilot, she was also the first skywriter, which she did by attaching magnesium flares to her plane, and the first woman to fly at night.[4] She would later perform stunts in China and Japan and volunteered as a fighter pilot in World War I, but flew for the Red Cross and Liberty Loan fund drives instead as women were still not accepted in the military at this time.[5] In 1917 and 1918, Stinson would set flight distance records and began a flight school with her mother and sister, Marjorie in Texas.[6] Unfortunately, in 1920, at 25 years old, after some health issues (not related to flying) she retired from her aviatrix days.

The photo above shows Stinson in Tokyo where she performed stunts for crowds amazed at viewing a female pilot. This must have been a publicity photo here in ca. 1918. You can see the dropped waist, linear bodice details, and long necklace of her ensemble that would have been very stylish at this time.

Coleman became the first African American and Native American internationally licensed female pilot in 1921.[7] Due to her race, she was discriminately not permitted to enter the U.S. flight schools, so she went to France to obtain her license. She then returned to the States as a stunt pilot. She was the only African American female pilot in the U.S., and as such, she was a novelty that many would flock to see during her flying exhibitions.[8] She died in a plane crash while practicing for an air show in 1926.

As a side note, it was not until 1939 in the U.S. that black civilians could attend flight school, and it was not until 1980 that the first black woman graduated from the U.S. Air Force Academy.[9] I think Coleman was certainly part of the push for black aviators to join the skies in the U.S., and frequently spoke to the press about the need for more men and women of color to become aviators. Unfortunately, she died before she could establish her flight school which would have aided in accomplishing this.[10]

The photo above hows a great combination of menswear pieces, like the hat and jacket, but with a more feminine blouse underneath.

At 16 years old, in 1928, Smith was the youngest licensed pilot in the world. She may be best known for her stunt at 17 years old of flying under the four bridges of the East River of New York City.[11] Hailing from Freeport, NY, she was called the Flying Flapper of Freeport. She was named female flyer of the year in 1930, even over Amelia Earhart. Her Washington Post obituary writes, “Celebrated in tabloids as Long Island’s ‘youthful air queen,’ ‘intrepid birdswoman,’ and ‘the flying flapper,’ Miss Smith was featured on a Wheaties cereal box in 1934.”[12]

The image above shows Elinor ca. 1930. Here she wears masculine pieces, like the tie, collared shirt, and jodhpur-style pants. It’s interesting to see how the public becomes more accommodating to a woman who dresses this way over the years between 1890-1930, to the point where she is celebrated and featured on a cereal box in this kind of clothing (below).

Okay, so you probably know this lady – Earhart is best known for flying across the Atlantic solo – but here are some things you may not have heard about her. By 1929, there were about 100 women licensed to fly in the United States.[13]  The first Women’s Air Derby was held that year and Louise Thaden won, followed by Gladys O’Donnel in second, and Amelia Earhart in third. After the race, some of the women, including Thaden and Earhart, formed a support group for female pilots. It was called the Ninety-Nines for the 99 women who first joined the group, but is still in existence today, although now with about 6,500 members.[14]

Specifically related to fashion and Earhart, she was one of the first celebrities to create her own fashion line in the 1930s! Inspired from a visit by fashion designer Elsa Schiaparelli, Earhart made 25 different outfits to be sold within R. H. Macy & Co.[15] This great article from History.com dives into the specifics of her fashion work if you’d like to read more! It talks about practical wear for women in particular, and the influence of Earhart’s use of separates (a practical way for women to make more of their wardrobes) and her creation of blouses with longer shirttails for women, which was previously only available for men.[16]

These 5 women, and many more female aviators, certainly made a name for themselves in their heyday and as they were often photographed by the press, their images were likely known by many others. I think the influence of these women wearing pieces of menswear and actively participating and excelling in a field that was largely dominated by men would have been greatly influential during this period. The way they dress and carry themselves with such confidence stands apart from the average female of that time (in addition to the fact that they were aviators) and may have been one of the key components of menswear inspired pieces for women in the decades to come, and the acceptance of women in pants, not to mention in roles considered to belong to men. Although it seems that for the most part, their menswear was used for practical purposes of flying and not everyday wear, I think seeing their images in the papers in this kind of clothing still would have ebbed away at the inherent shock of this kind of look.

If you think of how we admire aviators today because of the incredible skill that is still needed and degree of risk in flying, imagine the awe from the public in the early 1900s at these first pioneers. It makes sense that these women would have had a strong impression on those that were lucky enough to witness their flying, to see their likeness in the papers, or in Earhart’s case, to purchase a piece of clothing she designed.

4 thoughts on “5 Fearless Flying Females You Need to Know”