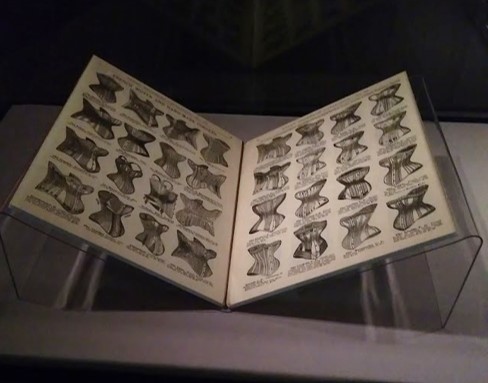 This month you may have noticed some posts on Femme Fashion Forward social media featuring images of objects in the Museum at Fashion Institute of Technology’s (FIT)s, The Body: Fashion and Physique exhibit, curated by Emma McClendon, which is open until May 5. If you have not seen it yet, I highly recommend you take a trip to the Museum at FIT! I want to round out this month by including some other objects in the exhibit from the late 19th to early 20th century, although the exhibit extends earlier and later beyond those dates. These selected objects from the exhibit highlight major differences between a stylish silhouette and physique from the 1880s-1910s and today, dispel some myths about corsetry, and may also be cause for reflection upon the ways in which some of these ideals have stayed with us through time.

These two corsets above were made in 1880. The black corset on the left was made in the USA and the pink corset on the right was made in France. Many times, when we think of the use of corsets, we picture tight-lacing and squeezing a woman’s body into an 18 inch waist corset, no matter her true size. The pink 32 inch corset, however, illustrates the point that most women did not practice tight-lacing and purchased corsets that fit their actual size and offered support without oppressive compression. The Museum notes in their label,

“Advertisements of the time promoted corsets from 18 to 30 inches, and ready-made corsets were available in further sizes. […] Women could also adjust the way their laces were tied and how tightly they closed their corsets, in some cases leaving an inch or more open at the back.”

Even if a size 30 inch corset was purchased, its wearer could still further loosen the size by adjusting the lacing, in the same way that we often picture lacing being adjusted to fit the body as tightly as possible.

These individualizations were common, as by the late 19th century, almost all women in the Western world could afford to wear a corset. The metal front hook-and-eye closures, like those on the pink corset, invented earlier in the 1800s, allowed a women to fasten a corset without assistance. This made the device more accessible to those without a lady’s maid, and furthermore, technological advancements provided cheaper, ready-made options.

This Stern Brothers mail-order catalog from 1889 (featured above) displays the wide variety of corsets that could be purchased and delivered by mail. These along with ready-made corsets in stores provided less expensive purchase options that propelled the ubiquity of the corset, albeit in vastly varying sizes, colors, and quality.

Though widespread, the corset was not without its naysayers. It’s not only today in 2018 that we might look upon corsets with disdain, but back in the 19th century and early 1900s, some had concerns as to its effects on the body. The example above is reprinted from The New York Medical Journal in 1887. The accompanying label about Robert L. Dickinson’s essay in this dress reform booklet says,

“The illustrations show that his concerns included damage to the skeletal system, displacement of organs, and diminished lung capacity. While some health concerns of the time proved to be valid–such as an impact on breathing and muscle atrophy–other claims, including the idea that corsets caused scoliosis and tuberculosis, were not.”

For someone engaged in tight-lacing practices, the effects upon their body would certainly be more damaging versus someone who bought an appropriate size and fitted their lacing accordingly.

Another important aspect of The Body as relates to the Femme Fashion Forward timeline is the change in silhouette from the bustle to the s-bend. There were two bustle periods in the 1800s, in the 1870s and 1880s (with a brief period of non-bustle styles in between) and the bustle below is of the latter.

This cotton twill tape and wire bustle support, worn underneath the skirt and another important undergarment along with the corset, was constructed in the 1880s. During this time, the revived bustle jutted out from the back at a more perpendicular angle than the sloping version before. This is the epitome of adjusting the shape of the body to fit the style of the time, instead of adjusting styles to fit the body. Plastic surgery might be an extreme example of this today, but one could argue that a padded shoulder is another way of manipulating the body’s natural form.

After the 1880s, the 1890s saw more natural skirt shapes with an hourglass shaped figure accentuated by a puffed shoulder, but by 1900, the stylish body had changed yet again. Now the s-bend silhouette would dominate, and new corset structures were needed to accomplish this. 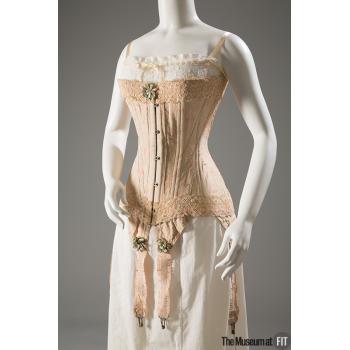 Though not in the exhibit, the example above is also in the Museum at FIT’s collection. This corset rests lower on the body and is longer than its predecessors. The Museum writes,

“By 1900, the fashion silhouette had shifted from emphasizing a full posterior to a prominent bosom. Bustles had fallen out of fashion and new ‘straight-front’ or ‘s-bend’ corsets (purported to be healthier than the earlier corsets, though they were more uncomfortable) thrust the wearers chest forward, creating a ‘monobosom.'”

The dresses below represent the change in silhouette from the 1880s second bustle period, to the leg o’ mutton sleeve, hourglass shape of the 1890s, to the s-bend of the early 1900s.

From left to right: Princess Louise Duchess if Fife at her Scottish home, September 1889; The Princess of Wales, 1894; Miss Camille Clifford, 1906; all found in Alison Gernshiem’s, Victorian and Edwardian Fashion: A Photographic Survey

Throughout this time, from the 1880s to the 1910s, women were wearing variations of the corset underneath their bodices and long skirts, but I think we can all agree that there is still a marked difference in the resulting silhouettes. The availability and variation in price of the corset made it a universal undergarment and a key component in shaping the woman’s body to the style of that time. Though it may seem like an extreme length to go in order to obtain a fashionable body, it is worth considering the lengths we will go to today in order to achieve a desired look. Fashion historian and Director of the Museum at FIT, Valerie Steele, argues in her book, The Corset: A Cultural History, that we have not completely forgone the corset today, but have rather internalized it into a hardened body. Will we look back on the desirable muscled bodies of today, like we may do now with the corset, and wonder why we had subjected our bodies to discomfort, and perhaps in some cases extreme exertion, for the sake of style? Or in reality, are the average adaptations to suit the current style not all that extreme, neither by corset nor by exercise?

One thought on “The Body: Fashion and Physique, Victorian – Edwardian Highlights”