The Dakota is a place of residence in New York City, but it’s more than just the building at 1 West 72nd Street along Central Park West. It was, and is, a luxurious apartment complex and has become one of the most exclusive addresses in New York City. It is often called the most famous apartment building in NYC, as it is considered to be the first luxury apartment building in Manhattan, and has gained recognition and a cult following over the years, though it did not always have that connotation.[1]  The building’s co-op board is infamous for its inclusion of popular cultural icons and celebrities, as well as its rejections. Can you believe that Madonna and Billy Joel were rejected from living here? Not only is the façade imposing, the current qualifications for actually living at the Dakota are intimidating as well, with rigorous background checks, financial statement submissions, etc. (the board has also supposedly been accused of bias among other things, but that’s not something we’ll explore in this post).

Ice skating in front of the Dakota, ca. 1890, as seen in Life at the Dakota by Stephen Birmingham (originally from Museum of the City of New York)

But let’s get back to the era of 1880-1930. Why talk about a building instead of dress? I thought this would be an interesting, brief detour from clothing itself, because your address, like clothing, can act as a social statement. This is a more holistic look at style during the 1880s, and a nod to the major architectural changes that were happening in the late 1900s, as impressive buildings were newly dotting the city skyline. 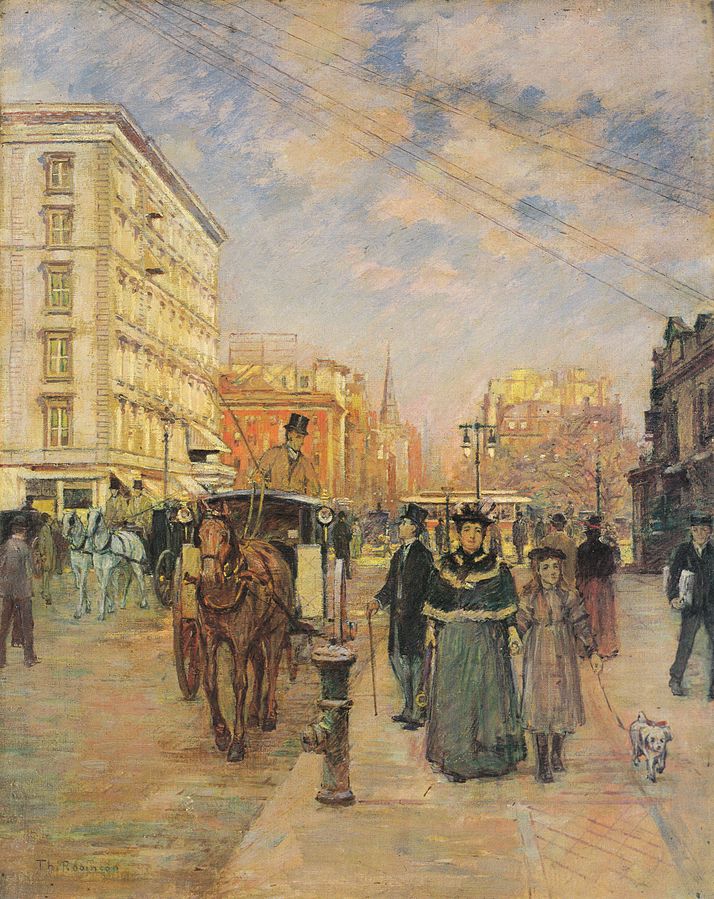 The Dakota was completed in 1884, by architect Henry J. Hardenbergh.  At this point in time, “the fashionable area to live was now Murray Hill, on Madison Avenue north of Thirty-fourth Street, where a few years earlier gentlemen of fashion had gone quail hunting, though a few diehard families like the Astors still clung to their mansions on lower Fifth Avenue.”[2] The Upper West side was not yet densely populated like it is today, as not many people lived beyond 42nd Street.  Edward Clark, who commissioned The Dakota, sought to change that and establish the area as a suburban connection to the frenzied downtown Manhattan [As a fashion side note, Clark was a co-founder of the Singer Sewing Machine Company. [3]] In fact, many suggest that due to the fact that this building was constructed in such an uninhabited area, it led to the nickname The Dakota, as in, it was so far away from the bustle of lower Manhattan it was as if it were built in the wild west (the Dakota territory was not yet a part of the U.S. when the Dakota was built).

Apartments were not common for the wealthy of New York City in the 19th century, and much of high society lived in mansions on Madison or Fifth Avenue. When the Dakota first opened in 1884, it did not attract the upper echelons of society, though it was considered a chic building.[4] It would take some time, more towards the 1920s, before the most elite of New York society would consider living in an apartment over a mansion on Fifth, Madison, or Park Avenue. Apartment complexes were also still relatively new as a concept in the late 19th century, even for middle- and upper-class families.  Stephan Birmingham of Life at The Dakota wrote, “Apartment houses, like the gaudy hotels, were regarded as architectural inducements to immorality. […] Apartment living implied a sleazy and suspicious transience.” [5] It was not seen as a choice to rent, but rather a failure in ownership. It also seemed indecent to have a bedroom on the same floor where you would eat, drink, and socialize.

This painting by Fernand Lungren is called, A Winter Wedding — Washington, Square, 1897, as seen in Paintings of New York: 1800-1950. You would likely see Dakotans wearing similar ensembles.

With this in mind, by the 1800s, New York City had become a prominent location, but an expensive one too. People of moderate means would soon be priced out of areas where buying or renting a house was becoming too costly. One of the first New Yorkers to experiment with “French Flats,” no doubt banking on the caché of adding the word “French,” was Rutherford Stuyvesant. To much surprise, when the moderately-priced building was completed in the 1860s, all of the apartments had already been rented, and soon other builders were planning their own apartment complexes.[6]

Print from a wood engraving of the Dakota interior from 1884, as seen in the collection of the Library of Congress

However, Clark had bigger plans for the Dakota in 1880 and commissioned the most luxurious apartment building in New York City in terms of room size, opulent interiors, and property amenities. He payed an unprecedented 2 million dollars to complete the project, and the result would be an elaborate, eclectic architectural mix.[7] Practical elements, like the service and lobby elevators (a novelty in and of themselves in the 1880s) and thick walls and floors for excellent insulation, would play an important role in comfortably accommodating tenants, while rich details like rare marble and fine wood carvings would attract a well-to-do clientele, typically, bankers, lawyers, and merchants (the amazing views of Central Park and the property’s tennis courts didn’t hurt either).

The Old Guard, like the Astors, still balked at the idea of living in the Dakota and the kind of tenants the building attracted were not the usual old money social strivers. The Dakota’s residents “conveyed a vaguely intellectual and artistic tone. Socially, this set the early Dakotans apart from the members of Mrs. Astor’s inner circle, where anything that smacked of intelligence and wit was actually frowned upon.”[8] Mrs. Astor’s circle, a literal list of the “Four Hundred” people whom she deemed acceptable to socialize with, primarily consisted of long-standing wealthy families of good taste. On the other hand, the Steinways, of Steinway Pianos, were some of the Dakota’s first residents, and the epitome of a family that was relatively wealthy and educated but would never have been accepted in the Astor’s social circle, because of their newly acquired wealth and immigrant status.

View of the Dakota ca. 1887 from https://www.bloomberg.com/news/articles/2015-08-05/the-dakota-inside-new-york-s-most-extravagant-apartment-building

Regardless, the Dakota filled its apartments immediately (though it still remains unclear whether the venture was a financial success for Clark), and soon, other builders were looking to create similar apartments with large rooms, and luxurious offerings, and some even gave them a Western-inspired name, like the Nevada or the Montana. It began to represent a way of life unrestricted by the rigid social codes of Mrs. Astor’s “400.” As described by Birmingham, it wasn’t necessarily fashionable, but apartment living was now considered “smart” and even a little edgy.[9] The West side and apartment living in the late 19th century and early 20th century would never be considered the height of fashion, but it could offer an elevated lifestyle in terms of more space for less cost, and that was desirable for many, and especially for those who eschewed the Astor’s social ladder.

The long-standing building has gained considerable elite status, but it wasn’t until the 1960s when stars like Lauren Bacall, Yoko Ono, and John Lennon, among others began to inhabit the Dakota. Though the upper crust initially turned up their noses to the idea of apartment living, the Dakota was the first to chip away at this ingrained perception of apartments as a lower class way of life. The building had a unique style unto itself, and this opulent structure has grown rich in legend while maintaining its architectural integrity. It’s interesting from a fashion perspective, because we often find that ideas and styles on the fringes of society make their way into the mainstream over time. The Victorian-gothic mix of this building has certainly always been luxurious and is now, without question, an iconic architectural staple of New York City.

Ariel view of the Dakota, http://www.businessinsider.com/15-crazy-facts-about-nycs-dakota-building-2015-8

In this post we stick to the origins and details within the Femme Fashion Forward Timeline, 1880-1930, but if you’re looking for more current information this article mentions some important points in the Dakota’s history outside of the FFF era. You can also click here to see a current version of what the Dakota’s apartments would look like.

One thought on “What is The Dakota?”